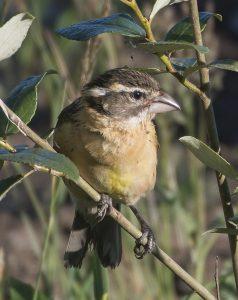 On an early June morning, I joined a recently retired Portland Audubon colleague, Pam Meyers, for a walk at Tualatin Hills Nature Park. It was a beautiful, partly-cloudy, early June day, warm enough for shirt sleeves, but cool enough for comfort. After a mere 25 yards or so, Pam stopped to listen to a sound I hadn’t noticed.  “That,” she says, is a Western Tanager.”  This was just the first of a number of birds we would meet by ear that day.

Pam recognizes songs of roughly 165-175 birds.  When you considered that the Willamette Valley has about 400 birds, this mean Pam knows the songs of nearly half the birds in our region.

Since retiring, Pam is able to bird more frequently, and being aware that she had just completed a course in ornithology at PSU, I asked whether she now knows more birds than last year.  “Not more,” she says, “but better.  I’m just quicker to recognize what I hear.”   Studying recorded sounds, practicing in the field, and taking part in Portland Audubon field trips have all helped Pam become a better birder.

For a suburban location, the Tualatin Hills Nature Park has a surprising diversity of bird sound.  Pam believes this is largely because the park is brimming with native habitat. Staff and volunteers are keeping invasive plant species out, giving local and migratory bird’s lot of nourishment, cover, and places to nest.

After the Western Tanager, we quickly hear a Bewicks Wren, followed by American Robin, Steller’s Jay, Western Wood-Pewee, Black-headed Grosbeak, and a Swainson’s Thrush.  Still, my favorite remains the melodious, full and rich song of the Pacific Wren.  It’s a bird we hear frequently in Portland Audubon sanctuaries, yet I never tire of it.

If you’d like to learn how to recognizer bird songs, classes are offered at Portland Audubon.  Check the website at PortlandAudubon.org 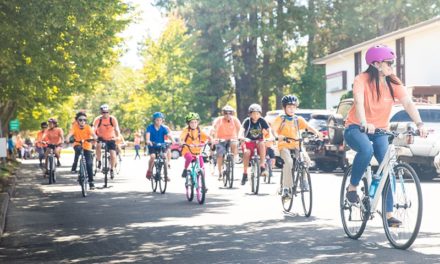 Working Together for a Sustainable Future

Health & Happiness: Healthy Fats vs. Bad Fats: Part 2, How to Tell the Difference